I always have a slight moment of panic when trekking through forests and mountains we haven’t been in before. It’s always exhilarating (actually mainly afterwards) but there’s that tiny niggle of fear that we could be on the wrong track – after all you can’t see anything through the trees – and then we’d be fated to wander in the wilderness for ever. Well obviously not – but you know what I mean!

Well this time, just as the niggle of fear started to hit we broke cover and out of the trees, clouds and snow loomed our designated lunch-spot with….even better…. wafts of the hot, garlic-scented designated lunch that awaited us. Heavenly! 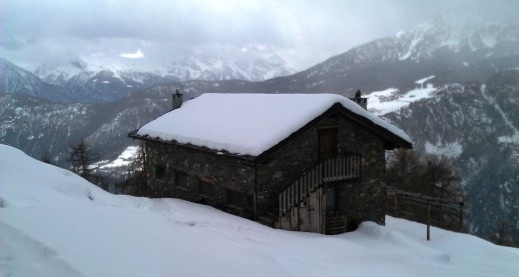 On this particular day lunch was ‘pizzoccheri’, an ancient dish of the Northern Italian region of Valtellina and consisting of a sort of ‘tagliatelle’ made with buckwheat or ‘gran saraceno’ flour, tossed with potatoes, cabbage, garlic and local cheese. A suitably hearty meal for those who work in the mountains, or indeed for those of us who had sweated their way on foot up through woods and snowdrifts!

After finishing our meal in front of an enormous blazing fire it was time for the downhill return journey and much talk – now bravely – of our adventure.

This year, our mild winter has now suddenly changed to cold and damp weather. So when I heard of the snowfall in Piemonte and Valle Aosta and watched the darkening skies out of my window, I felt in need of some comfort food to remind me of warming fires and warm full stomachs……where was that ‘pizzoccheri’?

Checking out my fridge (I didn’t want to walk down into the village with a downpour threatening) I found the only potatoes I possessed were already soft and sprouting green shoots, but I found ‘cavolo nero’  (the Italian equivalent of kale), a small squash or ‘zucca’, some garlic, parmesan and a fancy packet of ‘gran saraceno’ pasta gifted to us for Christmas.

As an aside – because ‘gran saraceno’ grows well in poor soil and harsh conditions it has become an ideal staple food for the mountains – and a plus for some of us is that it’s not a grain but a plant related to the sorrel family and is therefore gluten free.

I rather liked the idea of swapping potatoes in the dish for squash – they would give a dash of vibrant spring-colour and after their migration from the New World five hundred or so years ago ‘zucca’ have truly settled in and integrated themselves into the Italian way of life.

As it was now pouring with rain outside I decided to make my own pasta instead of using the packet one. I looked up the recipe as written by traditional specialists at the ‘Accademia del Pizzocchero’ of Teglio, but I saw they recommend a traditional method of flour and water. I’ve always been advised to use eggs for making pasta so here I’m using egg and milk. 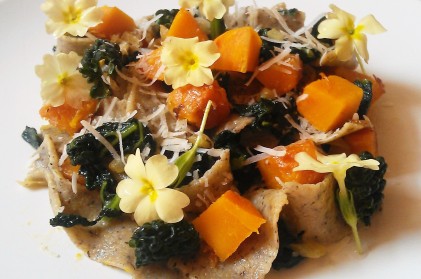 OR – use 300g dried pizzoccheri

Mix the two flours and salt together and tip onto a large wooden board. Make a well in the centre and break an egg into it.

Take a fork and start beating the egg gradually bringing in the flour from the edge of the bowl and slowly adding the milk.

Start using your hands and mix well together – you might need a little more milk if too dry or a little less, or more white flour if too wet.

Knead for a few minutes and when it feels smooth and pliable you’re ready to let it rest. Form into a ball, wrap in cling-film and put to one side for at least half an hour or until you’re ready to roll it out. I actually put mine in the fridge overnight and rolled it out the next day. 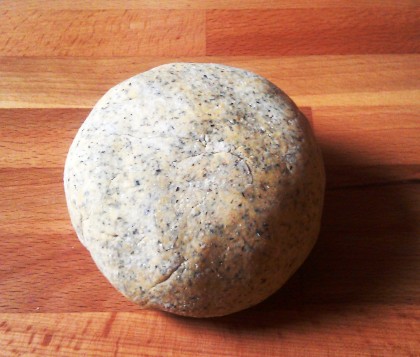 Take a large pastry board. Divide the dough ball in half – I find it easier to roll out two halves rather than the whole ball. But entirely up to you!

With your rolling pin roll out the dough into a fairly thin sheet – it’s too finicky for me to measure the exact millimeter thickness so I have to be infuriatingly vague and say, not too thin that it’s transparent and fragile but not too thick that it looks heavy and unattractive!

When you’re happy with your effort, trim the edges then cut the dough into strips approximately 10-15cm long by 2cm wide and put to one side, onto another floured board or plate.

I’m making pasta by hand because I find it incredibly satisfying and because I don’t make pasta very often. But for those of you with pasta machines you’ll probably use those instead of hand rolling.

Whilst the pasta is resting, de-seed the zucca and cut into large chunks. Drizzle with oil and coarse salt and dot with fresh sage leaves. Bake for about 20 minutes or until soft but not squishy. Remove from oven and allow to cool. When cool, remove the skin and dice in to smallish cubes.

Then bring a large pan of salted water to the boil.

Roughly chop the cavolo nero leaves, discarding any stems that are too thick and put them into the boiling water.

After 3-4 minutes add the pizzoccheri pasta strips and cook for 5 minutes (if you’re using dried pasta, check the cooking time).

Meanwhile heat a large frypan with butter. Add the finely chopped shallot and grated garlic and cook until soft but not brown.

Add the roasted pumpkin cubes at the last minute, stir briefly until heated through and season well.

Drain both the pasta and cavolo nero (keep back a little of the cooking water) and add to the fry-pan.

Give a quick stir, adding some of the cooking water, and tip onto plates.

Sprinkle with grated parmesan cheese and decorate with a few spring primroses or chopped parsley.

N.B.  Traditionally this pasta has mountain cheese melted in as well as parmesan, but much as I love the local cheese – and Bitto is usually the cheese used for this dish – I wanted to make the dish a little lighter…..a little more ‘spring-like’!

Follow EATING CLOUDS IN ITALY: Food, Health and Living in Italy on WordPress.com